Actually, West Princes have been on our radar for the best part of 2016 thanks to a handful of great live performances in both Glasgow and Edinburgh throughout the year alongside gigs at festivals such as Electric Fields and Stag and Dagger to boot.

The Glasgow fourpiece – named after the Woodlands street flat they lived in while at the Art School – launched their debut single ‘Wet Bark Is A Slug’ on the Voidoid Archive label (brainchild of artist Jim Lambie) last week, celebrating the release with a short 2 date UK tour of both their native city and London, the first of which was a stellar performance at a packed out The Poetry Club in Finnieston alongside party starters Pleasure Bent.

With a distinct 70s folky vibe full of breezy, playful guitar lines and luscious harmonies, the ‘Wet Bark Is A Slug’ video features the song against the work of Estonian animator Priit Parn’s 1984 film Time Out, resulting in a delightfully charming and captivating marriage of imagery and sound.

The Paul Simon/Vampire Weekend’s ‘Cape Cod Kwassa Kwassa’ vibe is one that will be broadcast to audiences Scotland wide thanks to it being chosen as ‘Single Of The Week’ on BBC Scotland’s The Janice Forsyth Show, and we hope it serves as a platform for greater things in 2017 for the West Princes guys.
Check out the video here. 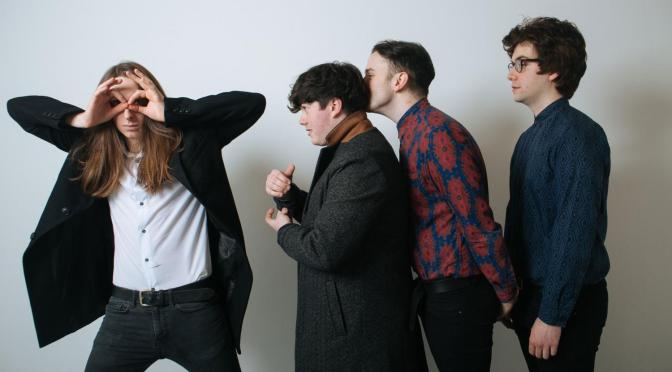 Glasgow based four-piece Catholic Action are no strangers to the art of eclectic creation, with March’s L.U.V. single release seeing their stock rise exponentially thanks to their signature brand of stylish indie art rock.

Having supported the likes of FFS, Swim Deep, and more recently, Teenage Fanclub, the band are kicking off an 8 date UK tour (see below) in London tomorrow night in support of their new AA release ‘Rita Ora’/Breakfast – out on 7″ and digital format on September 23 via Luv Luv Luv Records.

And in Chris McCrory (also of Casual Sex), we may have a new pretender to Alex Kapranos of Franz Ferdinand’s throne as the most talented frontman that Scotland has produced in recent years.